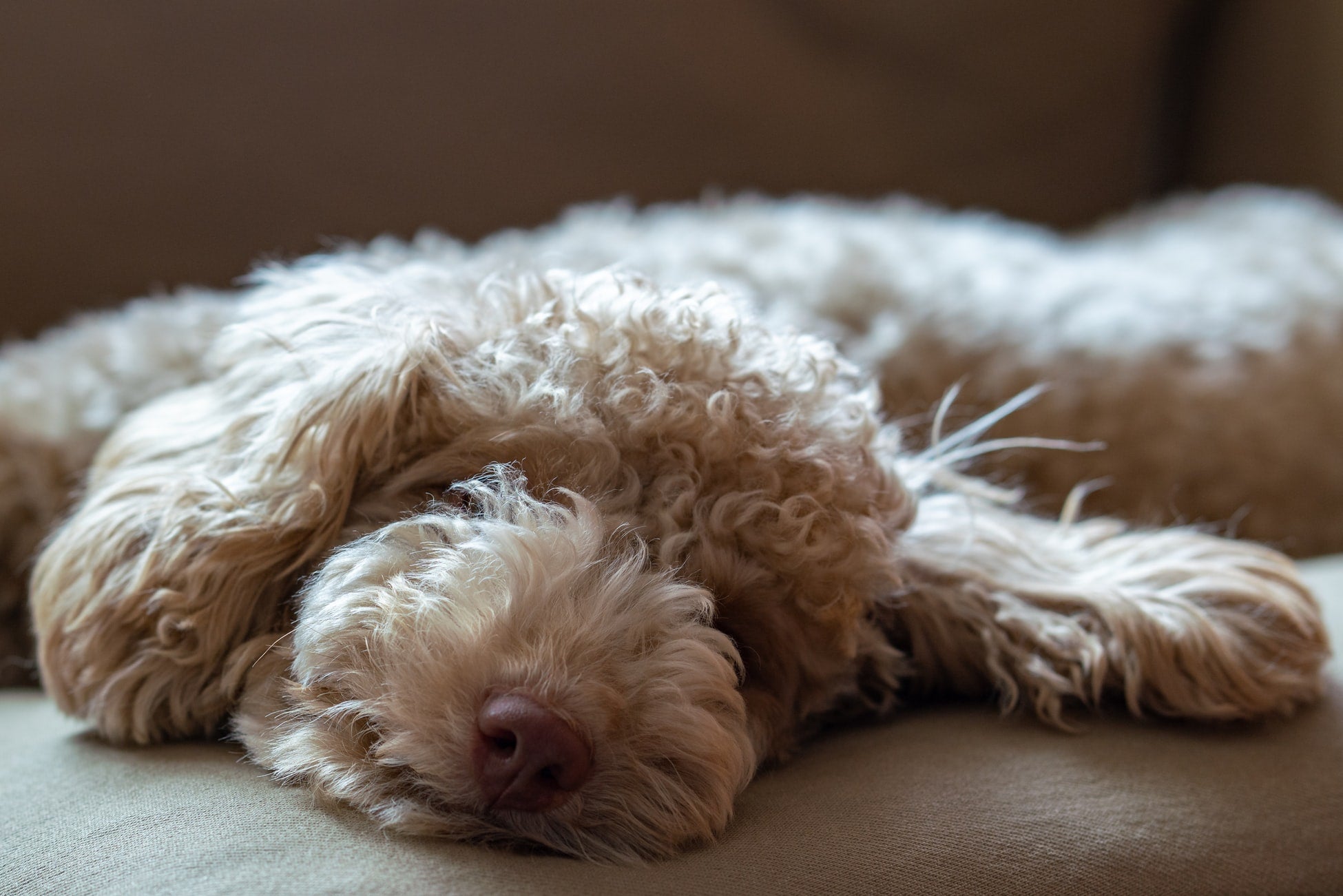 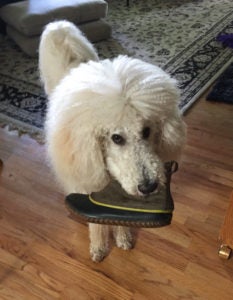 As the death toll in the US rises and nationwide protests compel us to look more closely at our values as a Nation, it would be easy to fall into a mighty deep funk. I’m not, and I remain somewhat optimistic, and one huge reason for that is a thirteen-month old standard poodle named Cosmo (after the flower, not the Seinfeld character). I am surviving the Pandemic with Cosmo Poodle.

He keeps us engaged so that we don’t obsess about the pandemic: Cosmo keeps us engaged and focused on him. He is a puppy, which means we need to watch him even after a year. Otherwise, our socks, underwear, sandals, or boots (see above) are fair game. We spend significant time forcing his mouth open and grabbing items away from those sharp little teeth. One time we forgot to take off his halter after an outing, and the next thing we knew, he had chewed through it.

He’s a still got his puppy fluff, and he collects a lot of detritus on his outings, so we are often busy grooming him. He’s not too big a fan of being groomed, but we give him a few treats, and he’s okay. Grooming him keeps us calm when we watch the news, as we do too often.

He’s a millennial dog: fear of being left out (FOMO) is one of the millennials’ stereotypical characteristics. Cosmo is the FOMO dog – he has to be with us no matter what he thinks we

Re-up to, because he doesn’t want to miss out. Case in point: I was writing this blog, and Cosmo was sitting at my feet just chilling; then my wife walked by, and he figured something better might be happening, so off he after with her.

It’s just fun to watch him and see how he reacts to us, and we especially enjoy his interactions with our grandchildren (9 and 7year-old girls) whom he adores. I think (and this may be a big stretch as I am not a dog whisperer) that maybe he sees them as substitute littermates. When they come over, he goes nuts, and when he finally calms down, he does everything he can think of to get their attention. A couple of years ago, we bought a big outdoor trampoline for the girls to use when they come over. They spend a lot of time at home because their mom, who is a single mother, owns and operates a restaurant. When they get on the trampoline, Cosmo jumps on with them and runs around them, which is fine except when he gets a little excited and starts nipping at them. After he is ejected, he lies on the deck, staring at the trampoline, utterly dejected.

One granddaughter pretends she’s running a dog school, and Cosmo is the student. It’s hilarious. They enjoy taking him on “walks” (I tag along to be safe); these walks are runs-they put him on a leash and run around the block, fast. The only time they stop is for Cosmo to mark territory (and they know never to allow him to mark territory on someone’s lawn). All of this is fun: for the girls, for us, and most of all, fun for Cosmo. And to repeat, it helps us focus on something positive.

He gets us out of the house: Every day, no matter the weather, Cosmo Poodle gets his outing.

If the weather is good, we go to a park where he runs around, plays with other dogs, and chases the ball we throw for him using a ball chucker. When we get there, his excitement and joy at bounding around outdoors is infectious-it lightens my mood.

In the rain, we put on his red polka dot raincoat and take him on a mostly tree-covered walk, so we don’t get too wet. Very smart on our part; when this big fluffy dog gets wet, he is tough to dry.

Often too, after our outing, we go by my stepdaughter’s restaurant to water and take care of the plants in front.

Since there’s no in-person school, the girls are there, and they do their thing with him-run him around the block while I chug after them. It’s his big bonus.

He’s the center of our communities: Some communities arise spontaneously. When Cosmo plays with other dogs, which is his favorite thing, we chat with the other dog owners, keeping social distance. This is pretty important during this period when we’re limiting our social contacts: we interact with people because of him. Often, he plays with the same dogs, so we see the same owners pretty regularly and we kind of get to know them a little. It’s a pleasant diversion from the everyday sheltering, and it’s because of Cosmo Poodle. When we walk him in the neighborhood, it gives us the opportunity to visit with neighbors. And of course, when the family-my stepdaughter, granddaughters, my wife and I- get together for a visit and a meal, Cosmo is there: hanging out with all of us, playing with the girls, and just being a delighted puppy in the midst of the pandemic.

Last but not least, he’s a lovable, loving companion: He loves being around us. He even follows us into the bathroom when we go to the toilet. The other day, I stepped out of the shower, and there he was, lying on the floor waiting for me. My wife and I laugh a lot due to Cosmo simply being Cosmo. He proudly brings us things, as if to say, maybe you need this. In the picture at the beginning of this blog, he’s carrying one of my wife’s boots-he brought it to us as if to say, “Guys, here, maybe put it on and take me to the park.” He sometimes jumps on the bed at night and snuggles with us. In the morning, if he has to go out and we’re still asleep, he licks one of us until we wake up to let him out.

The dog lacks in guile or gravitas. He is the puppy’s puppy. When he chases a ball at the park, instead of dropping it for us to throw again, he plays keep away-he drops the ball, and when one of us goes to pick it up, he grabs it and dances away. I’m sure he’s having a grand time goofing around. Again, he makes us laugh many times a day, and that helps us focus on the positives in life in this excruciatingly difficult time.

So, thank you, Cosmo Poodle, you goofball, loving, fluffy puppy, for helping us survive the pandemic.